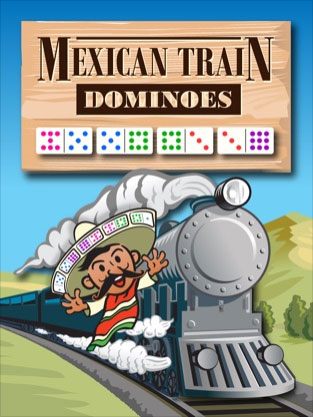 The traditional game of Mexican Train Dominoes is now available on iOS and Android. Hone your skills with this free version by playing against three computer opponents. This game will feed your addiction when your friends aren't available to play with. I hope you enjoy the fun and challenge of this playing game as much as I did making it.

"Better than other Mexican Train games out there. Really enjoyable."

"It is a difficult game to beat consistently. But it is hours of fun."

"Love this game so much I bought it for my daughter so she could take it home and play with her adult friends."

"Excellent product , I am hooked playing it :) great game !"

"This keeps our family busy for hours on game night. Great for teens and preteens. Up to 12 ppl can play which is perfect for our large fam of 10."

"We play this game all the time. So much easier with real numbers!"

For any comments, questions, or concerns please contact dillydallygames@gmail.com.

Number of Rounds: 13
Number of Players: 4
Number of Trains: 5
Number of Dominoes Dealt (to each player): 15

Object of the Game: The player with the fewest points at the end of the game wins. Each dot on a domino is worth a point. Each round is scored individually after a player plays all of his dominoes or no more turns can be taken.

How to Play: Each round begins with the player who was dealt the double domino for that round (i.e., double-twelve starts round 12).

A domino can be played on the player’s own train, The Mexican Train, or any other opposing player’s OPEN train.

The BONEYARD is the number of dominoes in the draw pile.

During a player's turn, the player can play as many double dominoes as he wants as long as he can finish his turn by playing a non-double domino ('covering the double').

If the double cannot be covered, then the player must draw from the BONEYARD to see if his drawn domino can cover the double.

If he still cannot cover the double then he must PASS and the next player is responsible for covering the double.

Normal play continues when the double is covered.

YOU CAN ROTATE A DOMINO BY DOUBLE TAPPING IT.