When you play Mexican Train Dominoes online, on Android or iOS, or with friends, you're mostly at the mercy of luck and the tiles. But like many card games and games of chance, there are strategies you can use to your advantage. A player's score can be improved even when you're likely not the first player out of tiles. You can influence when the game ends and how someone plays a double. You can also pin opponents into open trains if you're paying attention and have the right tiles.

We've played a lot and have scoured user questions and reviews from our apps and online Mexican Train games into this ultimate guide of rules, tips, tricks, and strategies for this classic domino game.

The gist for the impatient: 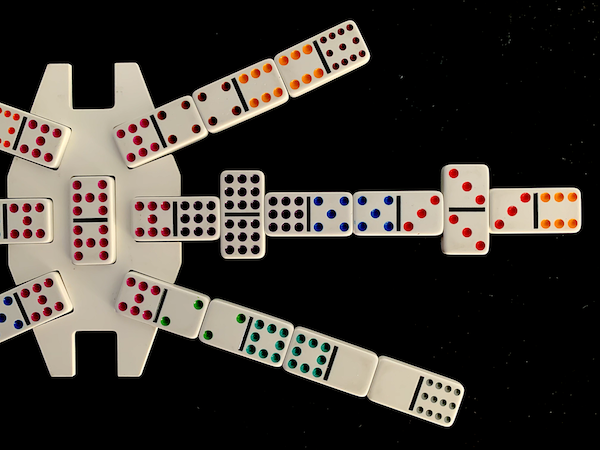 Playing doubles is the best way to make multiple consecutive turns, force other players to make moves, reduce your score, and win.

It’s rare, but you can end a game of Mexican Train with a double, too.


When you play Mexican Train Dominoes with other people, it's a little more sociable and has a less competitive edge than many other games. But it can turn competitive fast if you develop a strategy with your tiles.


If you have too many tiles and a competitor seems to have a clear path to victory, you should reduce your score. While the winning player will get a "0", which is the best you can hope for, identify your tiles with the highest pip (dots) count and play those first.

If you have a tile that adds up to 4 and another adds up to 10 or 12, unload the 10s and 12s first. String together doubles if you have them to unload more tiles faster by chaining moves.

This way if another player is out of tiles first, your score can be 4 and not 12, reducing your overall score. Mexican Train Dominoes is like golf: the lower your score, the better. The lowest number of pips after three rounds wins.


A train is blocked when no more tiles exist in any of the player's piles or the boneyard that can possibly connect to it. Trains are usually blocked close to the end of each game when available tiles are low.

It can be hard to know this when playing with physical tiles. The iOS and Android Mexican Train Dominoes games detect it automatically.


If you’re stuck with a tile you just need to unload and it won't go anywhere else among your train or the public train late in the game, lay it on someone's train. But as a rule, stick to your own train for as long as possible to leave them "stuck".

Given a choice to play a tile on multiple competitor's trains, always play on whoever has the most dominoes left. This way you don't risk someone getting unstuck from your tile and running out of tiles before you.

You can be extra mean to competitors by laying a tile with the same caboose end you already know they can't cover. If their train is open on a |4, lay another tile that ends in |4. Just be prepared to hide under the table if playing with friends or family!


The public train is the most common and useful place to unload your spare tiles.

Some players like to play all their spares first, then play on their train. Others claim the best way to go is to focus on their train and then unload spares.

Which you prefer is up to you, but we generally encourage people to unload all the spares early and as quickly as possible on the public train.


If you have an open train (sometimes marked by a penny in physical sets and marked as "open" in our apps), leave your train open if you have nothing to play. The number of dominoes in your train makes no difference to your score at the end of the game, so don't worry if your train is longer or shorter than others.

But if someone else lays a tile that opens you up to lay a tile on your train, play it.


Playing a double you can’t cover is a risky move but it can work itself out. Sometimes you may have a double and have to play it because you're almost out of tiles or just have no choice. This is common near the end of the game as people increasingly draw from the boneyard.


Yes, you can play with a double-6 set (the most common among most of our childhood box sets) and a double-15. Double-18 sets can be used but are best for large groups of more than a dozen.


Your train is best suited for your dominoes. Early on, you almost certainly want to close your train as quickly as possible. But if you're just stuck, or it's late in the game, you may have no choice.

To close your train and prevent others from playing tiles on it, you need to lay a tile on your own caboose. Playing on a public train domino or some other player's doesn't enable you or anyone else to close a train with the remaining dominoes. You can only close it by playing your own tile on your own train.


You can, but you probably want to start with a smaller set. The full, traditional set includes 91 dominoes which could take a long time for two people to play, and you risk getting stuck in draws. A minimum of three people is best. Four or more is ideal.


Depending on the number of players and whether you have a physical domino set, some players find these other house rules and variations interesting:


Mexican Train Dominoes in an app is great for beginners because all the lengthy setup and first draw steps are taken care of for you automatically. It also automatically hides the domino's faces and knows when the last tile is laid, and the rules are clear and unmistakable.

Our Mexican Train Dominoes app also automatically identifies matching dominoes, next moves, tracks how many tiles are left, draws, plays, and all the eligible, open, closed, and blocked trains.

A train marker is also identifiable automatically too. You can play Mexican Train Dominoes on iOS or Android for free today.

You may also be interested in these helpful posts: